Nexzu Mobility has recently launched the new Roadlark series of electric bicycles. Here is what to expect from this rather unique offering.

The Nexzu Roadlark is a dual battery electric cycle and is priced at Rs 42,000. The Nexzu Roadlark is a dual battery electric cycle and is priced at Rs 42,000. (Image: Rahul Ghosh)

Let’s start by saying that bicycles these days are a rage. In the absence of gyms and workout sessions thanks to the Covid-19 pandemic, people have moved to cycling. Hence, we see a variety of new models available in India these days. Thanks to the growing popularity, today the 3rd June has also been marked as ‘World Bicycle Day’. Another thing which is growing in popularity rapidly is the electric bicycle. There are quite a few brands available in the market today and this time round we thought of telling you about Nexzu Mobility’s Roadlark. 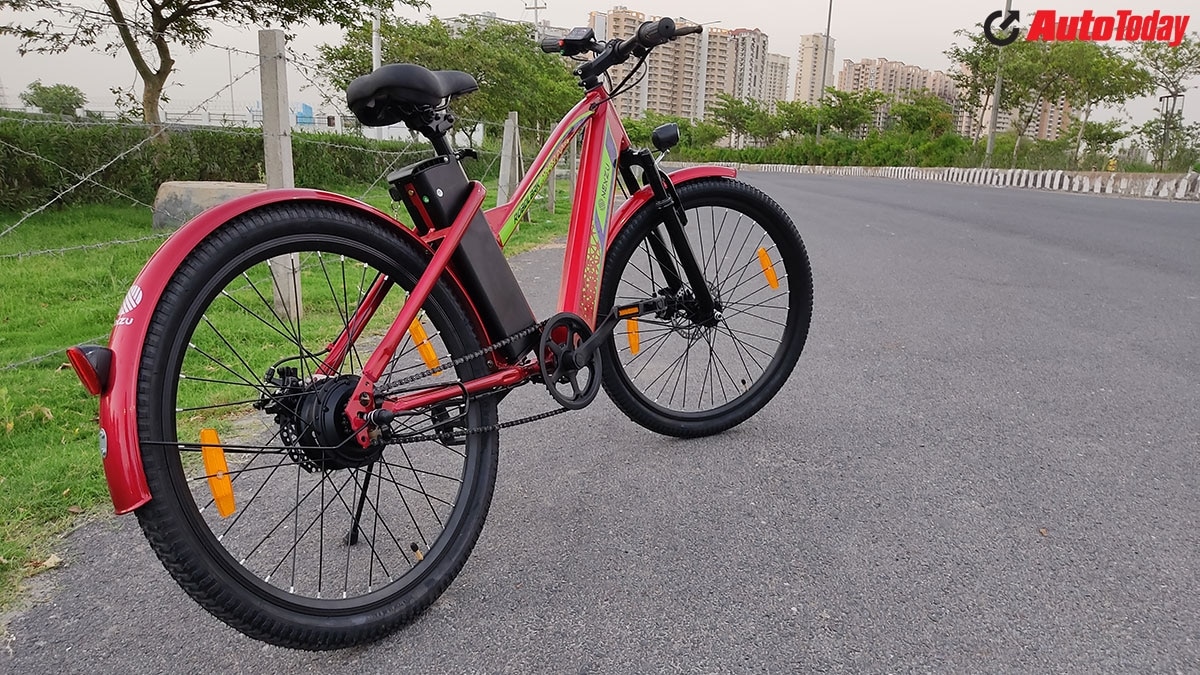 The Roadlark gets full metal fenders and is a single speed electric bicycle.

At first glance, the Nexzu Roadlark looks like any other premium bicycle. But look closely and the differences become evident. The cycle features a steel frame and the quality of paint is rich too. The stickers and decals look smart but are stuck on to the frame. The front end features a simple suspension unit and then there are the large fenders both up front and at the rear. The quality of paint on the fenders though is not as good as the one seen on the frame. There is a LED headlamp and this comes standard. The handlebar features a control panel for the various modes and battery level indicator. Right next to it sits two buttons; one to control the light and another works the horn which is built in. Quite handy we must say. The right-hand side handlebar grip also works as a throttle only to be used when the rider wants to go all electric. The seat is comfortable and features a quick release function. It also has a trick feature which we shall get to a little later. The Nexzu Roadlark rides on rather chunky 26in tyres. They are sure to come handy while riding on Indian roads. 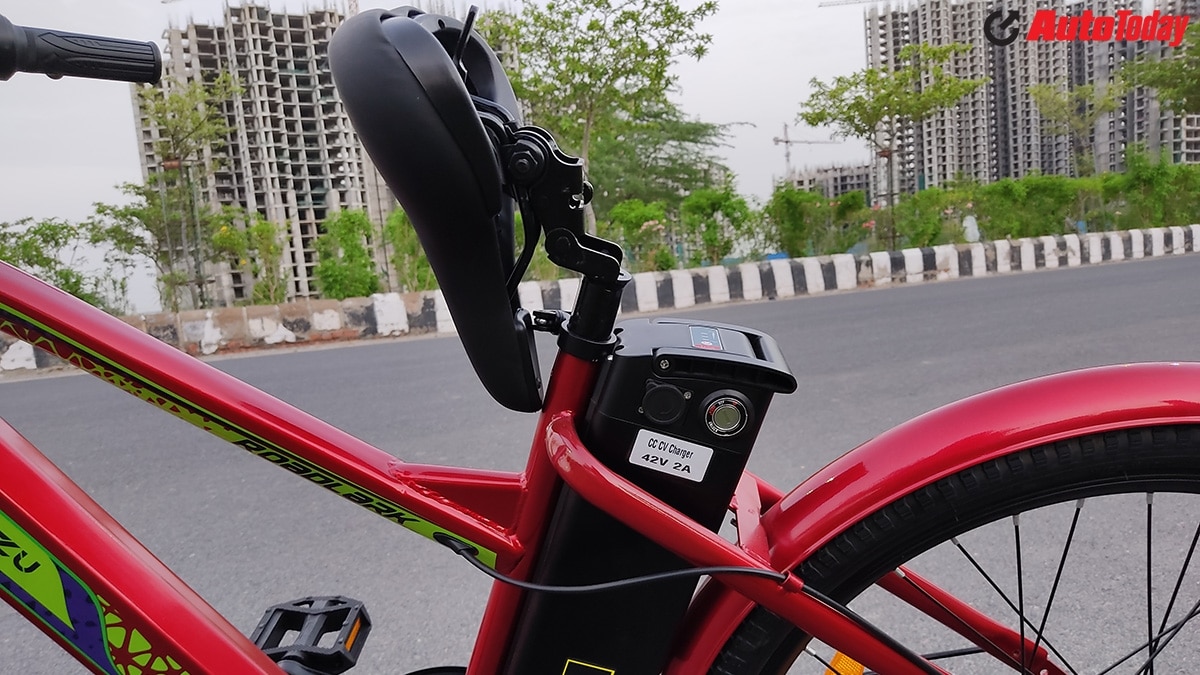 The rider’s seat needs to be flipped up to remove the rear battery. Note the key to lock and unlock the battery. It also has its own indicator.

The Nexzu Roadlark comes with dual batteries. There is a 5.2AH internal battery mounted in the frame which takes three hours for a full charge. It cannot be removed and the same can be charged by plugging in via a small socket provided in the frame. The second battery is a 8.7AH detachable battery which sits under the seat. The secondary battery is removable and can be charged in five hours. To ensure that the battery is not stolen, the company has given a lock too. To remove this battery one has to press a lever under the seat which allows the seat to flip up. A handle is provided to lift the battery out and put in on charge. The same charger which charges the internal battery charges the external one too. Nexzu has also provided a small switch to flip through the batteries. But its placement is a question. The switch sits under the frame and is exposed to the dirt and grime thrown up by the front tyre. This is the case in spite the fact that the Roadlark comes with substantially large mudguards. We surely will suggest repositioning the switch in forthcoming models.

The Roadlark uses a 250W BLDC hub motor to propel the bicycle and one has multiple modes to select from which we shall get to next. The controller on the handlebar to operate the electric mode functions. It also tells you the range left in the battery being used. There are built in controls for the light and the horn.

The Roadlark much like the competition can be ridden on full electric or Pedelec modes. In Power mode, the electric motor takes on 80 per cent of assist duties while in Standard mode it is reduced to 65 per cent. The Economy mode is where the distribution is 50 per cent. In all electric pedaling is not required and the Roadlark will effortlessly cruise at its top speed which is limited to 25kmph. As far as range is concerned, the company claims that the Roadlark will be able to traverse 100km in Pedelec mode and 75km in electric mode. Quite respectable numbers we must say. The Roadlark is a good buy if riding range is your top priority. It also is a tough bike which is built to last.

The Nexzu Roadlark feels a bit heavy to move around at first. This is primarily because of the steel frame and dual batteries. But once on it, the weight is not felt much. The seat is comfortable and the ergonomics good too. In Pedelec mode, the motor provides a good amount of boost in medium settings and acceleration as a result is brisk. In power modes things get even faster and the last thing you feel is the weight. But switch off the electric assist and one will feel the weight. In full electric mode, there is a minor lag between twisting the throttle and acceleration. But overall it is a good feature to have as the power delivery is near instant.

The Nexzu Roadlark comes with dual mechanical disk brakes which offer good stopping power. But the best thing is that there are sensors which cut off the power from the motor the moment the brakes are pressed. This is something which we really liked. The front suspension is a basic unit and a bit clunky when made to work hard. But ride gently and there is no cause of concern.

The Nexzu Roadlark is more of a heavy duty everyday ride. It is for someone who prefers pedaling to work every day or has to carry heavy loads. The cycle is built tough, and we expect it to last well. At Rs 42,000 it sure is a bit pricey but think of the fact that you are getting a dual battery system and the kind of range it offers, riding the Nexzu Roadlark is cheaper than walking.